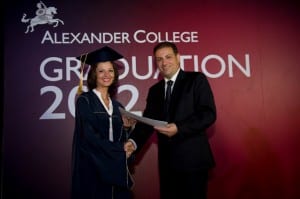 On this night, 4th July 2012, Alexander College held its 21st Annual Graduation and Final Show. The ceremony took place at Larnaca’s “Ktima Mackenzy“ where over 500 guests arrived to see 58 of our graduating students step up to the stage, one by one, to receive their well-earned degrees.
During the Principal’s speech, Mr. Andy Loppas not only praised the accomplishments of the students and his staff members but also acknowledged the role of the parents and families, commending them on the hardships they have had to overcome and the difficult sacrifices they have made on behalf of their children year after year to provide them with a better future.
Mr. Andreas Papoulas, Ministry of Education representative and Mr. Andreas Karittevlis, Aradippou Municipality representative also paid tribute and touched on the College’s contribution and ongoing role to Larnaca and Cyprus emphasizing the fact that Alexander is the only College on the island that has constructed its own purpose built premises in the last few years.
Mr. Barry Johnson, a highly regarded lecturer of Law at the College, stated in his address that the evening was a special opportunity to honour the graduating students and told them that “Your accomplishments are your own, but they are also a gift to me.”

The ceremony concluded with the presentation of various awards to exceptional students and also to two members of staff for their dedication to the College and over 10 years of service. This was then followed by the opening of the Final Show Exhibition where all students’ creative work was put on display.
On behalf of everyone at Alexander College, we would like to wish the Class of 2012 every success in their future. 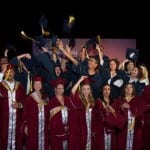 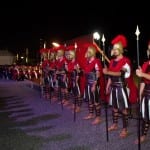 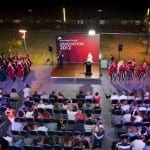